Search
← Back to Blog

My last two posts have focused on critical and creative thinking separately. But how do the two work together to improve performance, create better custom business simulations, or turn ideas into action? When it comes to the development of an idea, critical thinking surfaces the essential elements while creative thinking considers how to alter those elements. Together, these abilities improve an individual’s value and contributions to the organization and ultimately to society. But let’s dive a bit deeper.

Popular culture has strictly defined the roles of each half of the brain, labeling the right side the “artistic” side and the left side the “logical.” They do have slightly different strengths, but overall our one brain works like an interconnected and interdependent system. To argue which hemisphere of the brain is more important is like arguing that the human nervous system is more important than the human respiratory system. It is true that the right brain shows more neural activation during creative tasks, but both hemispheres are involved in thinking. The hemispheres of our brain constantly communicate with each other and most tasks require the use of both sides. Still, many people hold on to this idea of two brains. 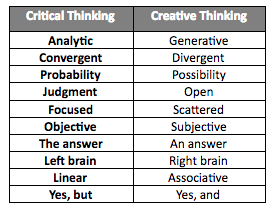 Splitting these skills into two distinct lists promotes the idea that individuals typically fall into one of the two categories—either a critical thinker or a creative thinker. The reality is that we each have the capability to perform both types of thinking. Granted, we may have a propensity toward one, but these traits should not be dividing factors. We are looking at critical thinking and creative thinking all wrong.

There is a deeper reason why critical and creative thinking should be developed together, and that reason is called the basal ganglia. The basal ganglia make up a part of the brain that is believed to be active in learning and habit formation. It just so happens the basal ganglia are located deep within the cerebral cortex between the left and right hemispheres.

Many creative-thinking activities are emotionally engaging, which is important for activating working memory. This is why we as leadership development consultants prioritize highly engaging tools like business simulations. But working memory holds information for only a short amount of time (while you are actively working with that information). Then those insightful lessons are lost to the onslaught of noise.

However, when the critical-thinking parts of the brain are activated along with the creative parts of the brain, associations are formed. Through continued practice, those lessons become part of the various areas of the basal ganglia, equipping thinkers with the ability to flow between analytical and generative, convergent and divergent, objective and subjective thinking.

In the various leadership development training programs we’ve developed, it’s clear that good decision makers and problem solvers flow between these skills. To help business simulation participants practice moving between critical and creative thinking, we created a series of tools and activities. Most of these tools first ask participants to identify the problem, which is often half of the issue in terms of making wise decisions. Learners begin to recognize the need to be thoughtful in how they define a problem. If they’re too specific or too broad, they may limit the generation of viable options.

And this is why a balance of critical and creative thinking is important. We’ve found that when assessing a problem, a good decision maker moves between analyzing the parts and generating ideas about the relationships of those parts. In doing so, he uncovers helpful information that exposes the system. Critical thinking provides a means to identify that a problem exists, while creative thinking helps with problem definition. So, as the decision maker navigates simulation training and looks at the situation from different viewpoints, he begins to see how the various parts interact with each other.

Michael Vaughan is the CEO of The Regis Company, a global provider of business simulations and experiential learning programs. Michael is the author of the books The Thinking Effect: Rethinking Thinking to Create Great Leaders and the New Value Worker and The End of Training: How Business Simulations Are Reshaping Business.